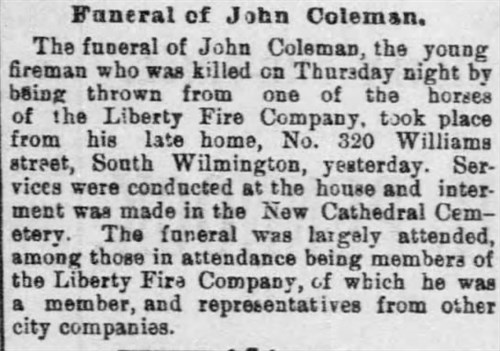 Firefighter John Coleman, age 30, was thrown from a horse and died instantly from a broken neck while exercising fire horses.  The animals had been out much of late, and had become quite spirited.  Coleman's horse made a spring forward, throwing the firefighter over his head and to the ground where Coleman fell upon his head.  He was taken to a nearby home, where Sarah Farra procured a basin of water and washed his head and face.  His body was carried to his home at 320 Williams Street, where his wife and aged mother were thrown into hysterics and could not be comforted.  John Coleman was employed at the Johnson Forge Company as a hammerer.  He left behind his wife, mother and one child.